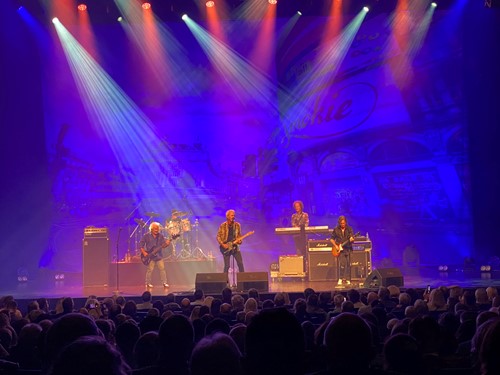 “Back in Business” may well be and overstatement at the moment, because like everyone else in the music industry we have to wait and see, how things go.
Having said that reports of the show were plentiful and social media gave those who weren’t there, some kind of idea, of the excitement that happened in Iceland.

The trip to Reykjavik, didn’t go too smoothly to start with, when some of the band’s equipment was subject to a security scare. The band were whisked from the lounge back to check-in to identify some pieces, so they could be loaded. It looked at one point that some of the band members might even miss their flight!
(They never make it easy for themselves)

On arrival into Iceland the band were Covid compliant and took arrival and departure tests in order to travel back home on the Sunday. Apparently, some members didn’t enjoy how far the bud went up their noses!

Bright and early on Saturday morning, some of the guys went to the local lagoon for some relaxation in the volcanic thermal waters of Reykjavik, which apparently was a great deal of fun.

When the band finally got to do their soundcheck on Saturday afternoon, Pete had some problems with his main acoustic, which really made life difficult for him. He sat waiting to see if his acoustic could be fixed and thankfully guitar tech Steve came up trumps and Pete could use his favourite acoustic guitar on his first gig with Smokie.

It was “sold out” a full house!

Smokie entered the stage to rapturous noise from the Icelandic audience and whilst there were a few nerves, the guys got down to business and gave the audience exactly what they came for.

The set consisted of the usual hits and a few change arounds of the setlist.
Desperate Measures was brought back in from the Nashville album and the band have also re-introduced that old favourite “Baby It’s You”

Backstage at the end of the show was of somewhat an emotional moment
All the band could be seen huddling together congratulating Pete who of course did a stellar job and will of course, now go on to put his name firmly in the legacy and history of Smokie members past and present.
It was particularly emotional for Terry at the end who was clearly quite overwhelmed to be back doing what he has done for so many years.
Mick said afterwards ……. “It was just nice to be back on a stage doing my real day job”

Smokie had a professional photographer at this first show, so we will share a selection of those photos with you as soon as we can.

For now! ………. Smokie are “back in business”
Thank you to everyone in Iceland who showed the band a most incredible Nordic welcome.