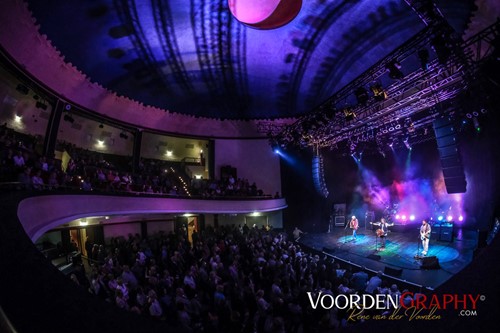 TRONDHEIM, NORWAY BOTH SHOWS "SOLD OUT"

A second show, that was added at the Olavshallen in Trondheim Norway. Has now "Sold Out"

Folks of Norway. Thank you for your continued support! 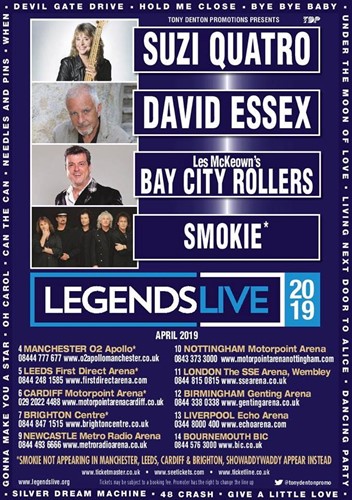 In the early part of 2018, Smokie were approached with regards to participating in another "Legends Live Tour" like the one we did a few years back, with Hot Chocolate and David Cassidy.

We knew that this would effect any plans for a UK Tour of our own in 2019, but felt that the opportunity was too good to pass up.

It's our hope that Smokie fans will support us on these dates. We also know from the last experience, that many fans felt very positive about seeing Smokie play some of the big arena venues in the UK.

Sadly there were some shows on this tour that Smokie could not commit to because of prior commitments and concerts that were already confirmed. However; we are delighted to join part of this tour and we hope to see our fans on these shows, we know you will make the most noise!!!!

Here is the information for dates and tickets.

As we pass into the mid part of September, we thought it might be a good time to remind the lads that they need to do their last bit of sunbathing, brush the dust off their instruments and get ready for what will be a grueling third quarter of 2018.

We all hope you have enjoyed your summer break!

WE MADE IT TO THE HOLIDAYS!

It’s the time of year where we say our goodbyes at the airport. We wish each other well and say goodbye to our crew. We’re all going on holiday!

Today we we’re greeted by lashing rain at Oslo airport and last night’s show was seriously cold in comparison to the last few weeks. A reminder; that autumn and winter are just around the corner.
The last few weeks have not only been hectic but travel has been quite grueling, lack of sleep been the order of the day!

Looking back on the summer months, it’s clear to ourselves that our popularity is as strong as ever with some of the biggest crowds ever turning out to watch what we do best!

We also had a gig at Leopardstown racecourse near Dublin this last weekend. We’ve never done that before and to look at the TV screens showing, the “Smokie Handicap Chase” was certainly a new one for all of us. The gig after the racing attracted almost 7000 Smokie fans, the majority turning up for the concert as apposed to the racing. We hope that one comes along again! We all enjoyed our time meeting the trainer and winning horse, as well as presenting the glass trophy that wore “our name”

It’s been a tough summer for our crew. They have had to deal with a fair share of missing gear and not very well checked ampliifiers, but as always they have got on with the job quite admirably, and made the show come together in the best way they know how.

We have quite a hectic autumn and winter ahead of us.

Our German Tour kicks off on the 21st September, we have some more Scandinavian gigs to finish before we head out with the 40 piece orchestra that will take us to our Christmas holidays, so recharging the batteries now is an absolute necessity!

We hope you enjoy what is left of the summer. You never know you might just catch a Smokie member on a beach somewhere on your travels!

We thought it might be time to give you an update of our summer shinanigans!

With dates in Norway, Czech Republic, Germany and Lichtenstein, the guys head to Sweden this coming week (Check Out Tour Dates) They also visit the Faroe Islands too, a place that Smokie have often frequented.

So what's been going on?  Fair enough to say the band are going full throttle at the moment. Last weekend the band had a most grueling schedule having to perform in Norway on Friday and Austria on Saturday. A 13 Hour travel day was on the cards before the band even got to their hotel to take a shower!
Another mistake by the airline (It's becoming a habit) meant that none of the band's guitars arrived for their second show in Austria, luckily the crew had organised replacement instruments, but it was very much the case that the gig was a bit of a struggle!

Martin celebrated his birthday and he thanks all fans who wished him well via Facebook.

As the summer rolls, it's also clear to see which band members are enjoying the sun in their downtime!

We shall keep you posted on anything that needs to be told and we may well have some very interesting news about 2019 dates for the UK!   Now that has got you thinking?

Tomorrow Smokie play their only UK Festival this year in Grassington, North Yorkshire.

The guys are looking forward to playing the festival and seeing some old and new faces!

As usual when the World Cup starts, Smokie have a Sweep-stake, throw a few pounds in the pot and somebody will walk away with the money!

In the tranquil surroundings of Lichtenstein, Band and Crew gathered for the team pick.

So who got who?

Terry's best team is Sweden so looks like he's not in the money!

Mike drew France so he has a "Bonne Chance"

Mick pulled out England, so he's definitely hoping for a good run!

The Crew got the pick of the bunch though with Brazil, Germany, Croatia and Switzerland all ending up in their hands.

TO RAIN OR NOT TO RAIN?

The festival season is now in full swing for Smokie, but as usual weather is playing it's part in hampering the flow of the gig!

Last weekend in Berlin. Smokie had to cut their set by three songs because the safety officer at the festival thought that the storm above, was a little too close and fierce for comfort. Rain quite literally peltered the fans who attended for the whole show. Disappointing for the guys but this is what goes on and someone has to take responsibility for safety of all persons working at the festival.

Fast Forward a week and the band once again wondered just how they would be affected in the Czech Republic? Thankfully after a downpour of over five hours, rain finally stopped five minutes before the band took to the stage in Pilbram.

This weekend also played host to Terry's birthday and social media was awash with goodwill messages towards Terry who celebrated his Birthday in the Chateau where the band were staying for the weekend.

A busy few weeks ahead now, let's hope the weather is kind to Smokie!

First of all, please accept our apologies for some recent website issues that have unfortunately stopped any updates in the last three weeks.

So what's been happening?
Mick recently celebrated 22 years in the band. On his own website Mick mentions the wonderful places where he has travelled and speaks of the bond that the five guys have had over so many years!
Sadly for Mick, on the weekend that marked this particular milestone, he also had the bad news that his Les Paul "Gold Top" that so many of you have seen over the last 18 years or so was damaged in transit and suffered a broken neck (We have been informed that it is in the workshop for repair)

Mike also celebrated his birthday recently and we know that all Smokie fans would wish Mike many happy returns!

So far this year, there has been a trend that the band have been truly overwhelmed with, in that almost all their live shows have been sold out!
It is also the case that the band's 2019 Tour Dates are also in extremely good shape, so the guys look pretty busy for the next 18 months or so.

The band have just completed 3 shows in Ireland, before they embark on the festival season next weekend where they head to Jurmala in Latvia before moving onto Kiev.
Summer can get a little crazy with travel for the guys, but hopefully flights will run smooth and good weather will greet Band and Crew wherever they may be!